Simplifyber is changing the way clothing is created with its 100% biodegradable, cellulose-based fabric and ground-breaking additive manufacturing process. 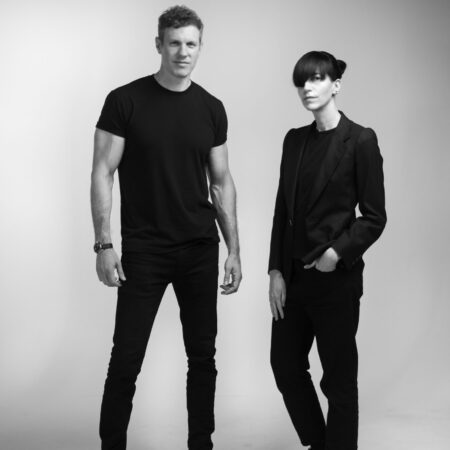 A new manufacturing process using biodegradable and waste-free fabric made using non-toxic ingredients to produce sustainable clothing created in a lab, not a factory.

At scale, Simplifyber’s solution is the cheapest and easiest way to make clothes—something the competition hasn't addressed. Simplifyber can remove 60% of the industrial steps in manufacturing using a patented process that is 30 times more efficient than traditional clothing manufacturing, using 88% less labor.

Why you should care:

Simplifyber has the potential to change the structure of the supply chain in fashion, solving the environmental impacts and human rights violations that plague the $1.5T apparel industry.

Maria, you’ve been a luxury fashion designer for 25 years working for Calvin Klein, Vera Wang, and Alexander McQueen. Phil, you were an active-duty military officer who has built and sold three companies. Your backgrounds couldn’t be more diverse. How did these experiences shape the founding of Simplifyber?

Maria: After two decades in the fashion industry, I started to get very familiar with its biggest problems: the negative impact on the environment, the terrible social conditions of factory workers which are getting worse because of outsourcing, the pollution happening in countries without proper regulations to handle it, and the chronic financial strain that the industry is under. All of these problems are happening because our 200-year-old manufacturing system isn’t suited to the level of mass production happening. It doesn’t scale very well because we rely on hand labor and sewing machines at even the most high-tech facilities. And really, if we’re making a million of one thing, like with a T-shirt, why not find a way to produce those things more efficiently? I wanted a solution that is not just more efficient, using better ingredients that are responsible for the environment, but something that would actually create systemic change on the manufacturing level to make the whole process of making clothes cheaper. This piece is really important because will drive adoption with even the most price-focused parts of the market, where it’s really hard to make a more sustainable change.

Phil: My background is in leadership and business. I’m a US Air Force Academy graduate, which is a really intense experience on the leadership and military front. I left the military as a Captain, leading hundreds of people in the US, in the Persian Gulf, and in Afghanistan in very difficult and uncertain environments. I ultimately parlayed those leadership lessons into the startup world. I went to MIT Sloan School of Management to get my MBA and started my first company. Simplifyber’s my fourth company. I generally tell people I create companies, build them, and sell them. The last company I sold was in China, which led me to see the terrible manufacturing conditions in the South, the overwhelming pollution, the long assembly lines, and the really unfit conditions of the factory workers. In this day and age, we still have factories with literal nets around them so that people aren’t jumping out of windows to die by suicide. There had to be a better way to manufacture with a larger view of sustainability in mind. Maria and I were introduced at a perfect transition period, for me to partner with her and launch Simplifyber.

We’ll come back to how you work together as co-founders, but to start, can you walk us through how Simplifyber fixes the entire apparel supply chain?

Maria: Today, we have a really long, complex supply chain. Most people don’t even realize all of the work, the different industrial parts, and processes that go into making clothes. First, we start with fiber, then we have to spin, weave, cut, and sew. Simplifyber shortens the supply chain by starting with the first step (fiber) and going straight to the end (a finished piece of clothing). We use a process that is 30 times more efficient than traditional clothing manufacturing, using 88% less labor. We start with a liquid made from raw material fibers (wood pulp, lyocell, cotton, recycled clothing, pineapple, agricultural waste fiber, etc.), and additives (food waste, salt, SDS, recoverable solvent). We turn that liquid into three-dimensional shapes that can drape and hang just like cotton. Our materials never have to be a yarn or flat fabric that needs to be sewn, they go from liquid directly into the garment.

This is important because the problems caused by the global fashion industry are happening from the worst players in the industry—the companies that make their decisions based on price. They don’t care that Simplifyber is a biodegradable fabric made of bio-based materials, non-toxic ingredients, and is waste free. We care about that, but they just care that it’s cheap and easy. At scale, our solution is by far the cheapest and easiest way to make clothes. That’s something our competition hasn’t addressed. As a designer, I constantly see new sustainable materials that look the same and have a nice story, but they’re more expensive. That does not solve the problems of the industry.

We’re looking at what can we take away from the system—not what we can add to it. We can remove 60% of the industrial steps in manufacturing. At the heart of what we’re doing is simplifying manufacturing by working directly with fiber to create a new manufacturing category. Instead of using a factory of a hundred sewers and having them work for one month, we can do that in one day with four machines and 12 workers.

How does the process actually work?

Maria: Designers provide us with their designs as sketches and/or 3D files. We create the material and finished (or near-finished) garment in-house, in North America, by dispersing the fibers into a liquid and then pouring the liquid into a mold, where it dries and takes the form of the mold. Any dyeing happens in the liquid stage before molding. We trim, check, and ship to the client.

Why hasn’t anyone solved this problem before? What were some of the hurdles the industry faced, in your experience, that led you to this solution, specifically?

Maria: The industry is so subdivided. People usually work in one part of the supply chain and they don’t really deviate too much between the different parts—they’re not connected and nobody really has an overview. Some people try to change their part for the better, to be more sustainable, but it’s hard to feel empowered to change the whole thing when you’re only working on a small part.

I waited for several years for somebody to come along and make the change I thought should happen in the fashion industry. I just got tired of waiting and realized that I just have to stick my neck out. This is a multidimensional, complex problem to solve as a whole, which is what Simplifyber is doing.

Sixty-five percent of startups fail because of co-founder conflict. Can you tell us about your dynamic as co-founders who had never worked together before?

Maria: First of all, Phil and I trust each other completely. We’re honest with each other and we’re not afraid to criticize—we take criticism without any problems. That’s the baseline. But I would say one of the most important elements of our partnership is that we have the same vision and our specialties lie in different areas; there’s no overlap in our roles. It’s very clear who does what; usually, we don’t even have to talk about it. I’ve been on teams where you have a little bit of duplication or there are two design founders or two science founders and it can add tension. This is really effortless. We’re now building out our team very intentionally by figuring out what we’re missing, where do our skills fall short?

Phil: This is a topic that’s super close to my heart. After starting four companies, investing as an angel in at least five companies, and being around the startup world for a long time, the founding team is the most important thing. This is the best founding relationship I’ve ever had in any of the companies I’ve started. Going back to what Maria said, it’s communication and trust and genuinely liking and caring about one another. I joke that if I were to pass away early, I want Maria to be the person speaking at the funeral because Maria knows the deep dark secrets not everyone knows. She has the nuclear codes to my soul [laughs].

Phil: We’re so open with each other, we’re not afraid to criticize one another. We’re always constructive and we always have the best interest of the company in mind. This is something I didn’t do well in some of my past companies because I wasn’t as mature at the time. I’m almost 43 years old and Maria is a couple of years older, and that level of maturity is something that’s really beautiful. If I do something Maria doesn’t like, I’ll hear about it and rightfully so, and vice versa.

How do you delineate your roles and responsibilities?

Maria: Everything that pertains to communicating the vision, the strategy of how to attack the fashion industry to change it, and overseeing design, the product, that’s on my side.

Phil: For me, it’s everything on the operational side of the business, everything from fundraising to partnership outreach to hiring to being a liaison to our legal staff and IP—all of that admin I want to take away from Maria to ensure she can ascend to the level of CEO. Part of my role, and the other executive roles in the company once we onboard them, is to help the CEO ascend to the level of the CEO, which to me means ensuring that Maria is able to be at the strategic level.

At scale, our solution is by far the cheapest and easiest way to make clothes.